From this work we show the results of the mapping and modeling of the Los Cayos basin. This basin is located in the offshore to the extreme northwest of South America. Further, this consists of exposed (islands and banks) and submerged areas comprised of deposits from Cretaceous to Holocene. From the seismic interpretation and well correlations a three dimensional model was established of the sequences present in the subsurface of the basin


Previous studies (Muñoz, et al., 1997) of the west Los Cayos Basin including the Miskito Basin, which underlies a large part of Nicaragua shallow platform, and the back-arc region on the Caribbean side of Nicaragua were available. The data obtained by seismic reflection seems to indicate that most of the sediments covering the lower sector of the Nicaragua High are pelagic deposits (Holcombe et al., 1990 in: Geister and Díaz, 2003). The sedimentary section ranging in thickness from 500 to 1000 m is composed of carbonates, chert, and siliceous limestone, overlying an irregular basement. There are also Neogene carbonates and Cenozoic calc-alkaline rocks that outcrop on San Andres Island. This paper will present the interpretation of seismic survey for modeling Los Cayos Basin.


The study area of Los Cayos basin is located on the Caribbean plate and it is bounded by the North American Plate, the South American Plate, and the Cocos Plate. Its total surface area is 129,591.3 km2 from which approximately 100 km2 are islands and keys (FIGURE 1). 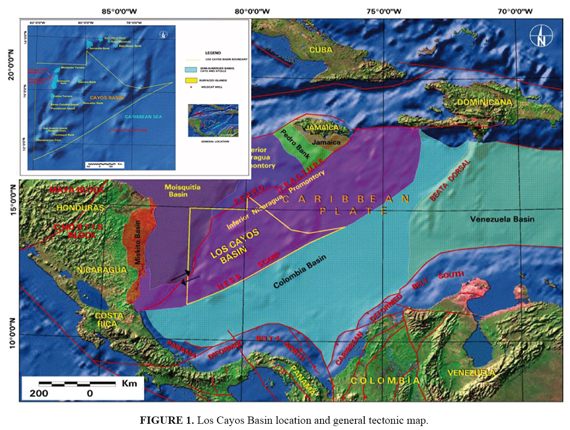 The most important feature of the basin (Geister and Díaz, 2003) is the San Andres depression, which is located to the west of San Andres Island and extends northwards to the Providencia depression. Another feature, the Hess Scarp is approximately 1000 km long to the southwest and its relief varies between 100 and 1000 m. It makes a bathymetric break between the lower sector at the Nicaragua High and the Colombia Basin to the south (Mauffret and Leroy, 1997).


The area under study is covered by 2100 km of 2D seismic surveys arranged in a rectangular grid of 22 strike and 19 dip lines (FIGURE 2). The seismic parameters correspond to fold of 48, 4 ms sampling rate and record length of 6 seconds. The structural and stratigraphic analysis of the platform was based on seismic data and well log information. Additional data include onshore outcrop in the San Andres and Providencia Islands (San Luis and the San Andrés Formation) (Vargas, 2004). Many banks and atolls are present in the basin, for instance: Courtown Cays, Roncador Bank, Serrana Bank, and Quitasueño bank. Also present are features which identify faults, such as the San Andrés Islands, Punta Hansa Fault and El Cove faults. Also present are a Miocene and Pleistocene calcareous sequence on San Andres Island, and volcanic rocks on the Providencia and Santa Catalina Islands (Hubach, 1956; Geister, 1992). 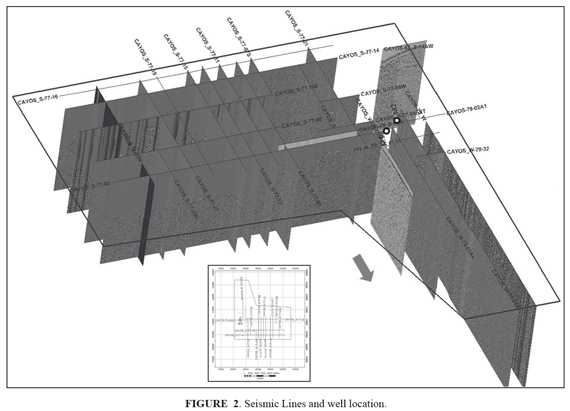 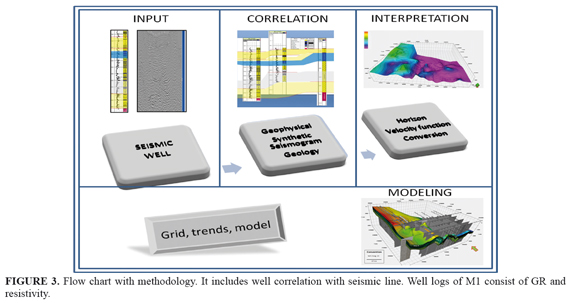 The structural framework was based on seismic sections. The structural model includes several stages, e.g., location of the fault, editing, fault surface generation, interpolation of the grid, trends, and fi nally the model was populated.

The three dimensional representation was created using fence diagrams. Modeling permitted threedimensional visualization of the basin, with pattern and the structures present in the sedimentary sequences.


Sequence boundaries, defi ned structure and stratigraphy of Los Cayos Basin are based on geophysical data and surface mapping on banks and islands. The western offshore of Los Cayos Basin is divided into fi ve tectonic provinces: Pedro Fracture, Upper Promontory of Nicaragua, Pedro Bank, Mosquitia Nicaragua Promontory and Mosquitia, with Pedro Fracture to the west and southwest.

Los Cayos Basin is considered to be a transpressional basin in which normal and transcurrent faults interact (Vargas, 2004). Based on geophysical information, the sea floor 3D structural interpretation shows two main structures: a 45-50ºE fault system and an E-W to 45ºW fault system. The first NE system seems to match normal regional faults. This faulted is also influenced by a second transverse normal and a strike-slip fault system forming hanging-wall and footwall blocks (FIGURE 4). 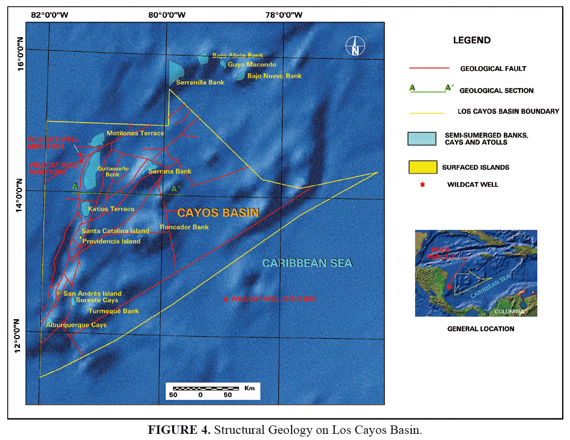 Basement (K): well include information of the basal sequence, displayed in the lower part (FIGURE 5) which is formed by deep oceanic basalts (Campanian?- Maastrichtian) and volcanic rocks (Kolla et al., 1984). The seismic facies is chaotic, without reflections and limited by an unconformity on the top. 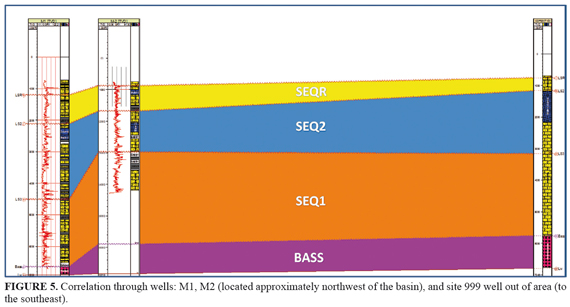 In the M-1 and M-2 wells, the rocks located in the bottom are composed of intercalations of bioclastic rocks (biocalcarenite, intracalcarenite, calcarenite) and fine-grained calcareous rocks (calcareous shale, mudstones and micrites), (middle Eocene), and have a thickness of 518 m to 883 m. Some lignite beds and asphalt varieties such as gilsonite can be found as well as oil in the rock fractures and gas. Sequence 1 is resting unconformably on basement, and is characterized by continuous, parallel, high-amplitude reflections.

Sequence 2 (Ol - Mioc): in the upper part of the sequence, bioclastic rocks (biocalcarenite, intracalcarenite and calcarenite) are predominant. A change in the energy of the environment is made evident by this. In the Site 999 well, it consists of calcareous clayey limestone (chalk) with interbedded foraminifera and nannofossils and abundant layers of volcanic ash. The middle/upper part of the sequence (Miocene) is composed of interstratified clay with nannofossils, sediments mixed with nannofossils and volcanic ash beds. The middle of the sequence (Miocene) is similar to the previous one but it contains siliceous microfossils and a higher content of carbonate. On San Andres Island, there are calcareous rocks (middle Miocene) composed of biomicritic limestones, clayey limestones and sandy limestones.

According the site 999 well, it is composed of a clayey calcareous limestone with frequent beds of volcanic ash intercalations (FIGURE 5).

Sequence R (Pl -Plei): the site 999 well is composed of clayey sediments with foraminifera and nannofossils with interbedded volcanic ash. Upper Pleistocene can be distinguished by the presence of siliceous microfossils. On vertical sections several reflecting horizons are evident.

San Andreas Island is composed of submerged reef limestones with a slight inclination to the east (Pliocene, San Luis Fm.). During the latest phase of geological development on Los Cayos Basin, banksand atolls of reefs and reef debris material are built at the edges of

the San Andres Island, mainly on its East side. They are up to 50 m thick. The sedimentary rocks are composed from bottom to top of evaporites with shales and coal traces, calcarenites and calcilutites and biocalcarenites. There is variation to reef limestones and calcilutite in the upper beds.

ANALYSES AND INTEGRATION AND CORRELATION DATA

The lowest sequence is the Basement, which is characterized by few reflections with chaotic character. It is overlain by a sedimentary package structurally influenced by normal faults, which mainly cross the reflectors of sequences 1 and 2 (FIGURE 6). Sequence 1 overlies the basal unit, resting unconformably on Basement and characterized by continuous, parallel, high-amplitude reflections. It is structurally influenced. 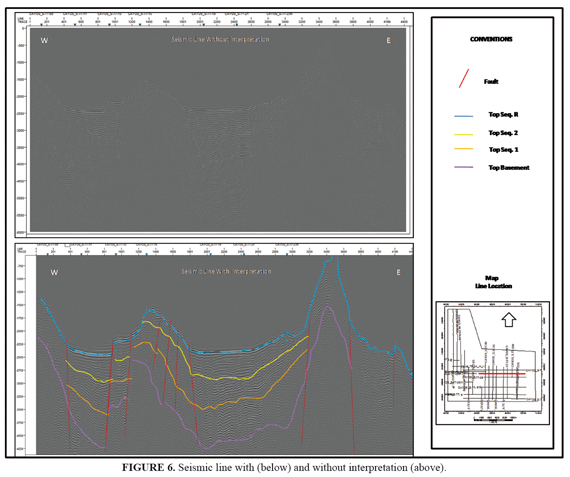 Sequence 2 is under Sequence R, and is characterized by strong and continuous reflectors. This sequence is related to Miocene deposits overlapped by Eocene- Oligocene limestones, which are influenced by vertical and normal faults. The sequence R represents the most recent deposits (upper most sequence), and is characterized by variable and irregular seismic reflectors. Besides, it is possible to recognize a series of volcanic highs that create structures in the Los Cayos Basin, for instance, the Quitasueño High, the Serrana and Roncador Islands (FIGURE 7). 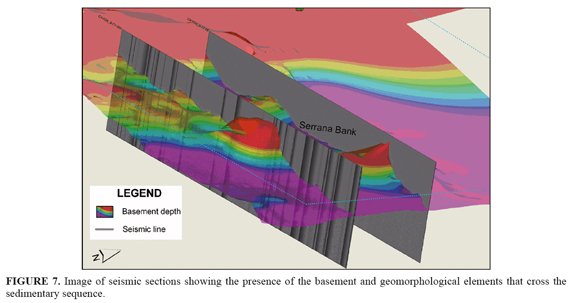 Sequence analyses of well log data and two dimensional seismic lines provide a tool for modeling the subsurface. Via geophysical interpretation a structural framework was created using seismic and well data (FIGURE 8). The stratigraphy and structure can be extrapolated to the few explored areas, for instance, Los Cayos Basin. Interpretation shows a corridor between Albuquerque and Quitasueño cays bounded by NE longitudinal faults. This corridor is infl uenced transversally by NW strike and normal faults that form a series of fallen and uplifted blocks. 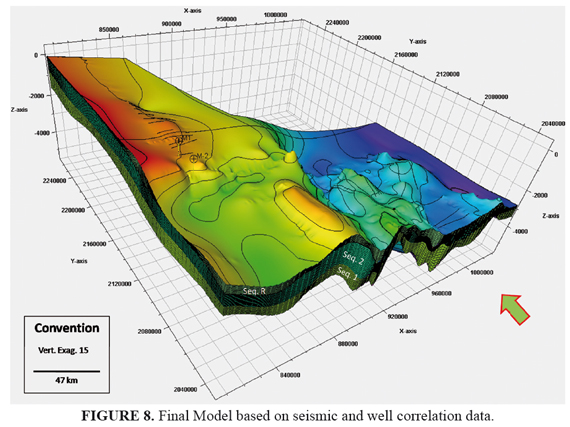 The Basement sequence is overlain by deposition of sedimentary packages, where the calcareous shales, lutite, calcilutite and evaporite levels reported in the wells were found intercalated with bioclastic calcareous layers that would function as seal rocks. The seismic shows that these structural highs are mostly isolated from the depocenters, where it is believed the hydrocarbon related to biogenic accumulations and reefs would be formed.

The evident separation of the structural highs and lows on the seismic and the bathymetry is precisely what makes the low blocks more prospective. The reason for this is the presence of a thick sedimentary sequence which is bounded by volcanic and/or faulted uplifted blocks against which the sedimentary deposits are truncated or onlap in its margins, generating stratigraphic-structural traps against the highs.